September 20, 2020 | 11 minutes
TL;DR: You can run other code while also running the eye animation on the HalloWing M4 by updating the Adafruit M4_Eyes C++ Library.

With Halloween coming up next month, I was looking around the Adafruit website for a fun Halloween-themed project. They have a few options, but the one that caught my eye (pun intended 😆) was the HalloWing M4 board. It’s a skull-shaped ATSAMD51J19A board with a 1.54" 240x240 full color IPS TFT screen that’s preset to show a moving eye that gives the impression something is watching you 👁.

Plus, it has lots of features including:

It’s fun for either a Halloween costume or decoration. If the look of the default eye doesn’t suit your style, Adafruit has 15 to choose from and you can even create your own fairly easily with their templates and the JSON data use to create the eye animation.

There are some nuances to programming this board though. If you want to program the NeoPixel LEDs to light up or use the capacitive touch pads to trigger interactions while also running the eye animation, then you need to update the C++Adafruit library to do so. The board supports CircuitPython, but the eye animation is currently only available as an Arduino library.

This didn’t seem clear from the Adafruit website and I found it a little tricky to get the NeoPixel LEDs working with the eye animation on my HalloWing M4, so I wanted to share my steps here in case anyone else is trying to do something similar.

Here are the steps I took to make the NeoPixel LEDs work with the animation. You should also be able to expand on these steps to use other features of the board along with the eye animation.

Install the Board in the Arduino IDE The Arduino IDE has certain boards installed by default that you can start working with right away. As of the time of writing, the HalloWing M4 is not one of them, so you’ll need to follow the steps below to install it.

If you’re new to using Github, here are the steps for cloning the repo:

Now that you have the Arduino IDE installed and setup and have cloned the Github repo, you can start editing the library. As you’ve probably noticed, there are a lot of programs in the Adafruit Learning System Guides repo. The one that we’re interested in is the M4_Eyes program, so our focus will be on the files in that folder.

Within the M4_Eyes program folder, there are a handful of files with the extension .cpp. These are C++ files and all of the ones that begin with user are things that you can configure and adjust based on your needs. This guide will focus on the user_neopixel.cpp file because we’re enabling the NeoPixel sidelight LEDs. Here’s a quick rundown of the other .cpp user files though and ways you can use them:

You can only run one of these user*.cpp files at a time. For the one that you want to use, the first line of code in the file should look like this:

For my HalloWing though, I thought it would be fun to use purple and orange for the NeoPixels to give it more of a Halloween vibe. The code to make these changes is available in a Github Gist and I’ll walk through it below.

First, at the top of the file, make sure the value after #if is set to 1, so that this file gets included in the project build.

On the next line, keep the #include statement from the original code in the user_neopixel.cpp file. This is used to import the Adafruit NeoPixel library into the program so that we can access the NeoPixels.

Now, let’s setup the NeoPixels. First, define the strip of NeoPixels as an object. To do this, you need to use the Adafruit_NeoPixel type and call the strip() function, which takes three arguments: the number of LEDs (LED_COUNT in our case), the pin that the strip is using (LED_PIN in our case), and the pixel type flags. For the HalloWing M4, the NeoPixels use the GRB bitstream and 800 KHz bitstream (the NeoPixels on this board are using WS2812 LEDs).

Then, create a user_setup(void) function that initializes the NeoPixel strip. The function doesn’t return anything, so it’s type is void and it doesn’t need to take any arguments either. You can adjust the brightness value based on your desired effect; the minimum value is 0 and the maximum is 255.

Then, create a set_colors(void) function to set the NeoPixel color values. This is where the magic happens! Inside the function, loop over each NeoPixel and check what the previous color was. If it was orange, make the current NeoPixel purple; otherwise, make it orange to set the alternating effect.

The strip.setPixelColor() function takes the current NeoPixel index and sets its color value using the HSV color selected. After the loop completes, call strip.show() to update the colors in the NeoPixel strip so that the colors actually display on the board.

In addition to the setPixelColor(), ColorHSV(), and show() functions, there are other functions in the Adafruit NeoPixel library that you can use to manipulate the NeoPixels.

That’s it! You can now publish the updated M4_Eyes library to your HalloWing M4 to see the changes.

Publishing the Updated M4_Eyes Library to the HalloWing M4

In the Arduino IDE, follow the steps below to publish the changes to the M4_Eyes library to your HalloWing M4. 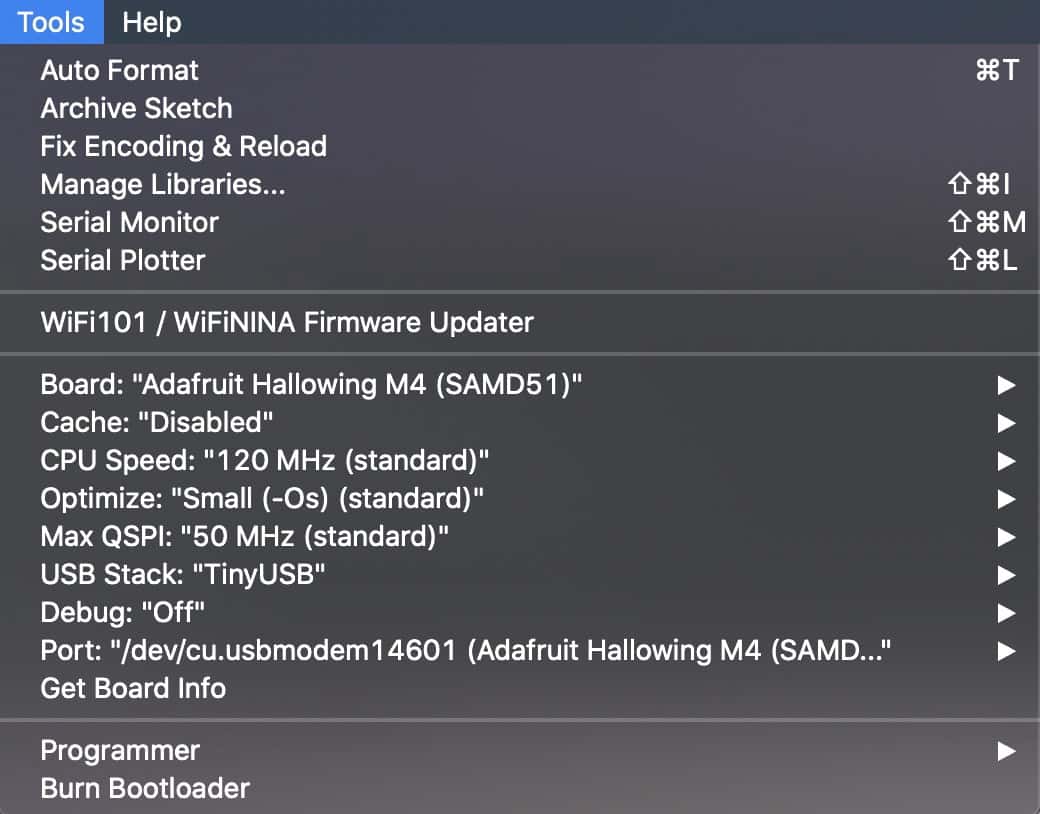 Mode Button on Back of HalloWing M4 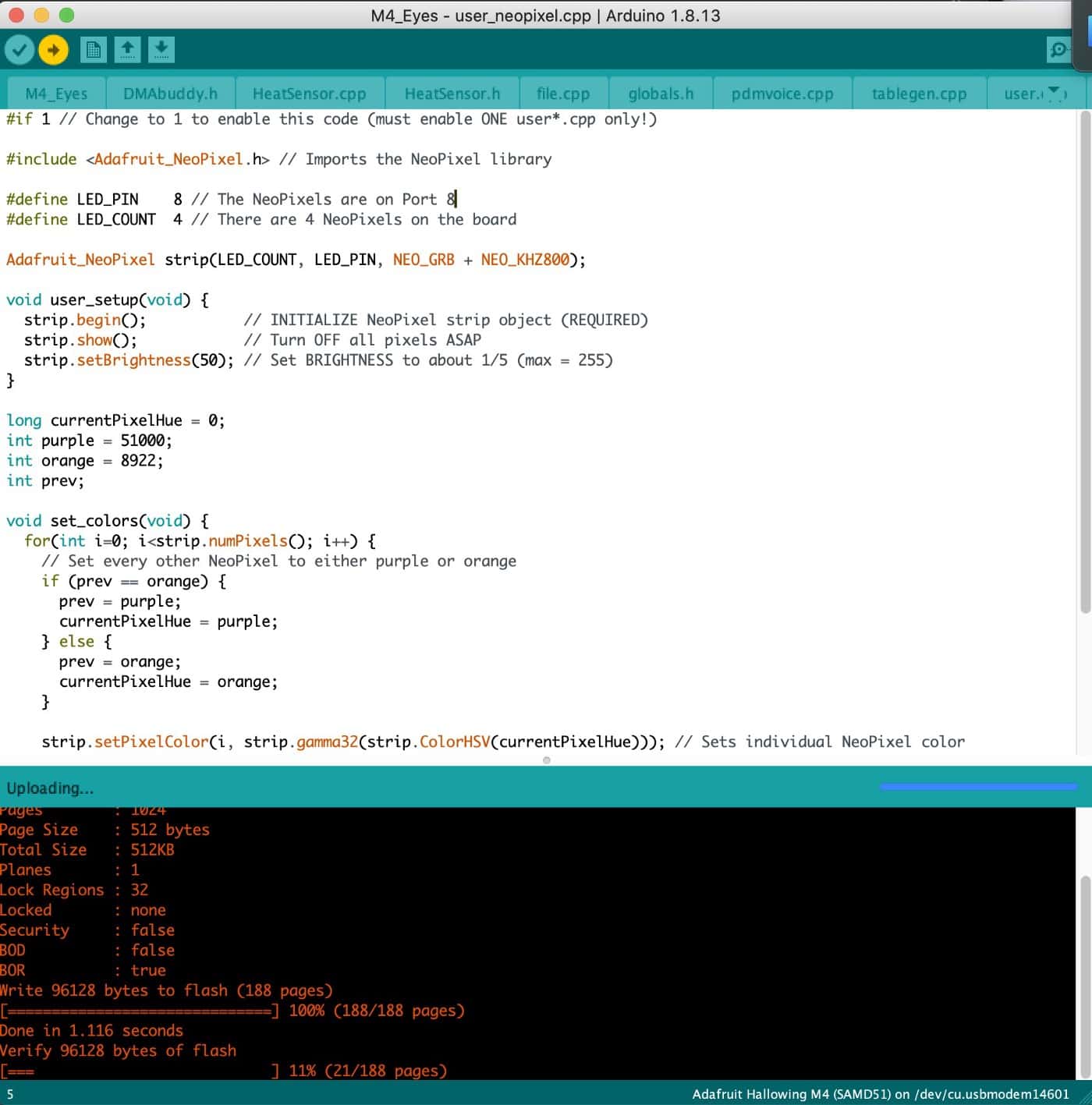 Publishing a Program/Sketch to HalloWing M4 in Arduino IDE

It’s pretty straight forward to change the eye style to one of the pre-defined Adafruit eye styles. There’s one hidden gotcha though.

Those are the main steps for running the NeoPixels while also using the eye animation and configuring the pixel colors. Enjoy getting your HalloWing ready for Halloween! 🎃