Adding LEDs to a Cross-Stitch Project

Over the past year, I've been working on cross-stitch projects in the evenings as a way to relax. I recently came across the Arduino LilyPad and was curious about using conductive thread to sew a circuit. So, I decided to use one to add LEDs to a cross-stitch project. I thought it would be a nice touch for this circuit board pattern and am happy with the finished project.

This is a great beginner sewable electronics project, so if you like to sew but are new to electronics, here's what you need to know to create a similar project.

I chose this circuit board pattern for my project and went with the black fabric because it helps hide the board and battery in the completed project. You can select any cross-stitch pattern for your project. Just keep in mind that the LEDs require stitches on each terminal (positive and negative) and that the conductive thread is a silver color, so it's best to select a pattern where the silver stitches won't detract from the completed picture.

For this project, you'll need the following items. Disclosure: I get commissions for purchases made through links marked as "Amazon affiliate links" in this post.

Selecting the LilyPad Board

There are multiple versions of the Arduino LilyPad circuit board, and most of them will work on this project. However, not all of the LilyPad boards are the same:

When I started working on this project, I bought a LilyPad from Amazon because it was the cheapest option. The bootloader is either missing or broken, though, so I haven't been able to publish programs to it (something I plan to fix at some point). With some research, I discovered this tends to happen more frequently with cheaper boards. You can add or fix the bootloader, but it's tricky for beginners. Keep this in mind as you compare and purchase your board. The LilyPad I linked to above from SparkFun worked for me right out of the box.

The steps that I followed for completing the project are as follows:

It's helpful to program the LilyPad before you connect the LEDs because it can become awkward to connect it to the computer once it's stitched to the fabric.

I recommend thinking about the LEDs at the outset and deciding where you want to put them before starting to cross-stitch (although it's ok if you do this after you've sewn the picture).

Each LED requires at least one stitch of conductive thread on each terminal (positive and negative), so you'll need to leave space for these stitches in the picture. Ideally, you should wrap the thread through the terminal multiple times before stitching it into the design to ensure maximum connectivity between the terminal and the thread (I wrapped it three times for each terminal). 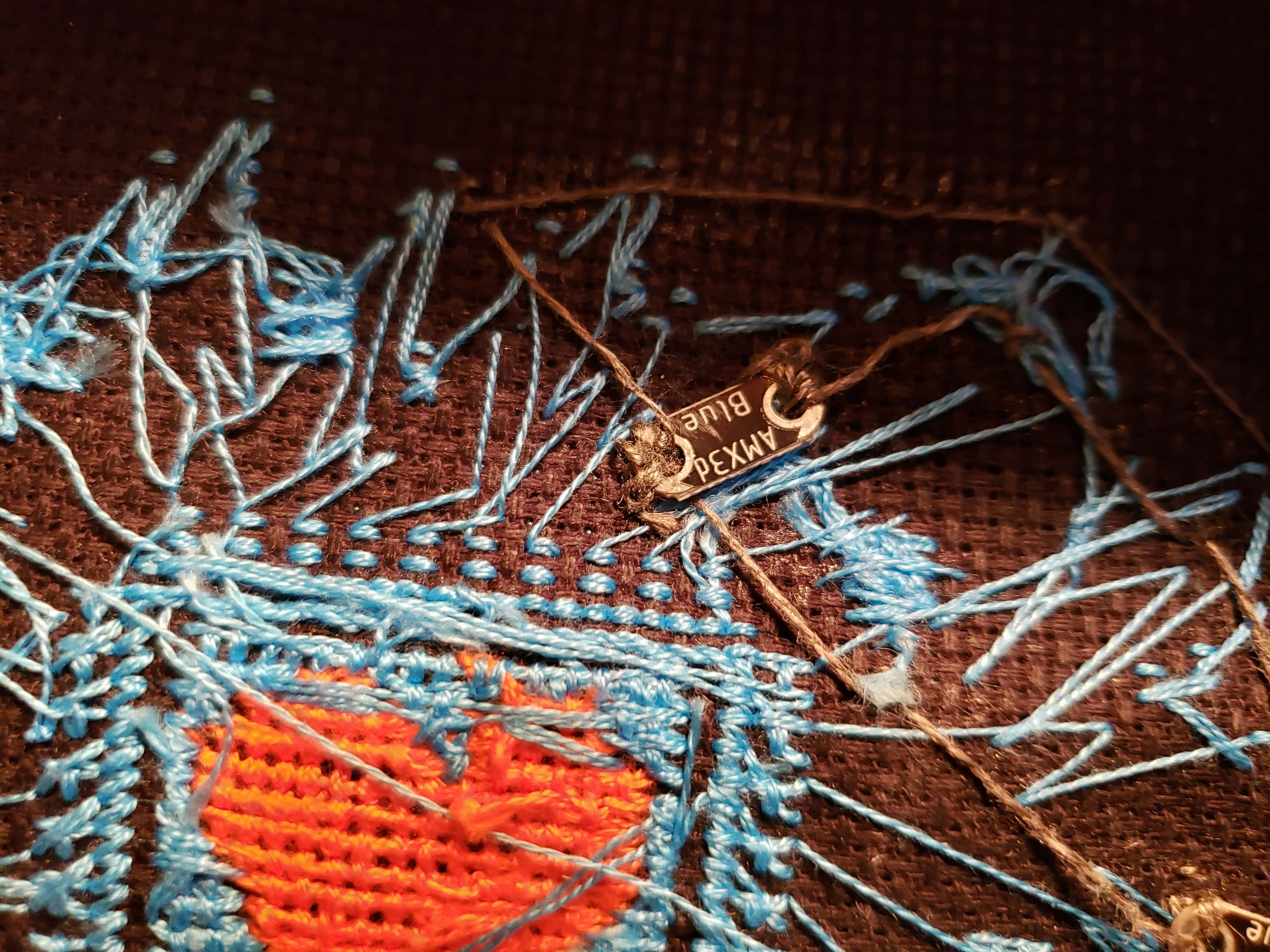 When stitching the LEDs, you'll need a separate piece of conductive thread for connecting the positive and negative terminals to other LEDs or the LilyPad. Choose a long length of thread to start with. Breaks in the thread can cause connection issues that prevent your LEDs from lighting up correctly.

A short circuit will cause a break in your circuit and prevent your LED lights from lighting up. It can also potentially fry your LilyPad or even electrocute you, so it's essential to be careful when wiring up the LEDs. To avoid short circuits, be mindful of the following: 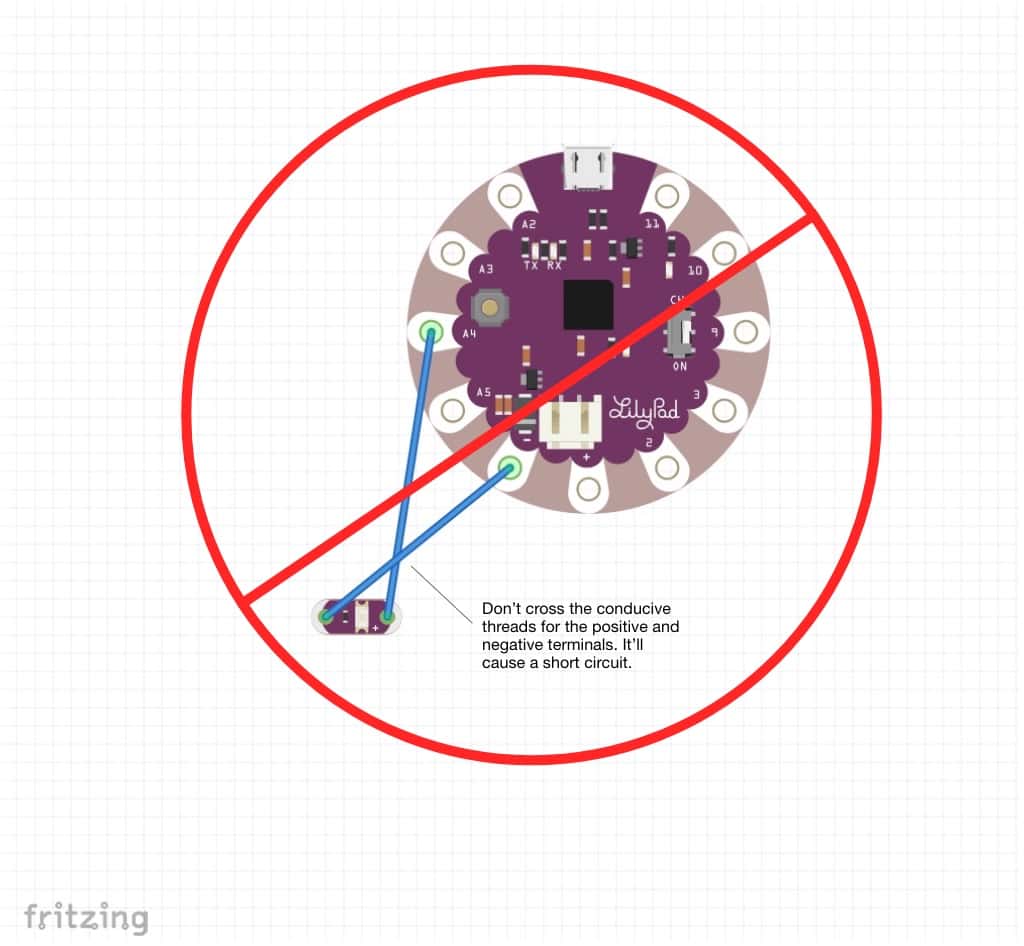 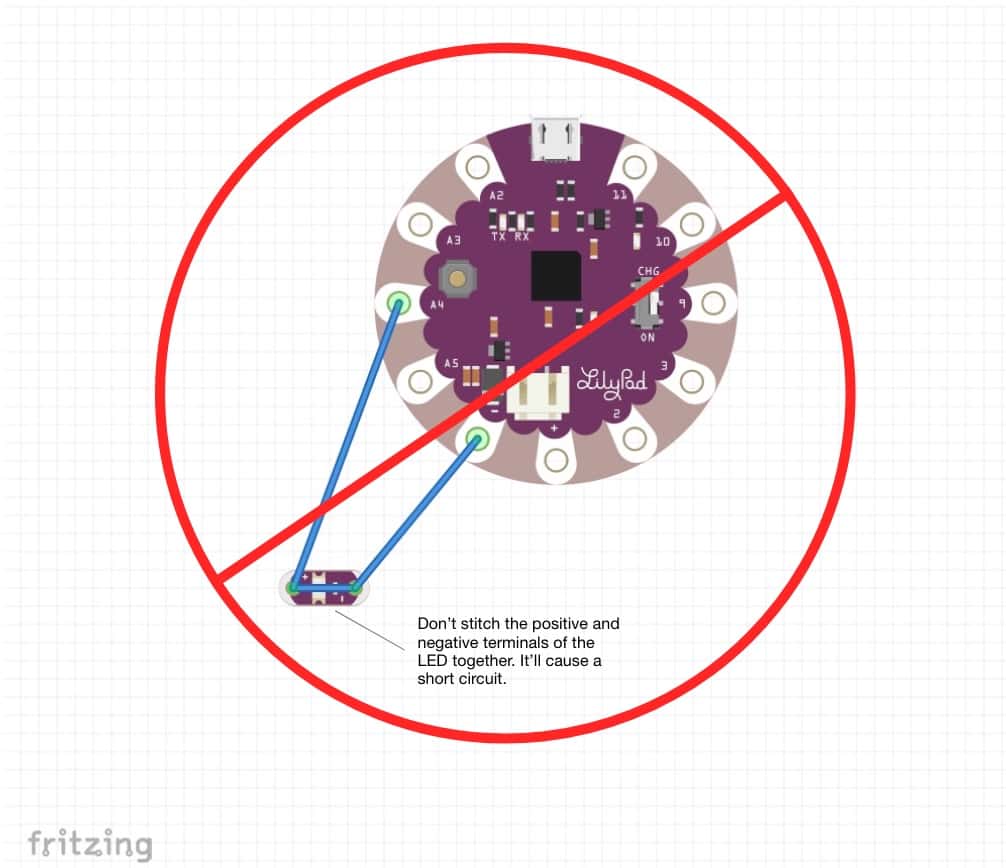 Don't stitch the positive and negative LED terminals together

Planning your circuit will help you ensure that you leave enough space for the LEDs and that your wiring is planned in a safe way that won't create short circuits.

Considerations for Wiring the Circuit

The general-purpose input-output (GPIO) pads are configured as follows for the Arduino LilyPad USB board. Different versions of the LilyPad may have different GPIO configurations. For the purposes of this project, you can use analog or digital pads on the board. 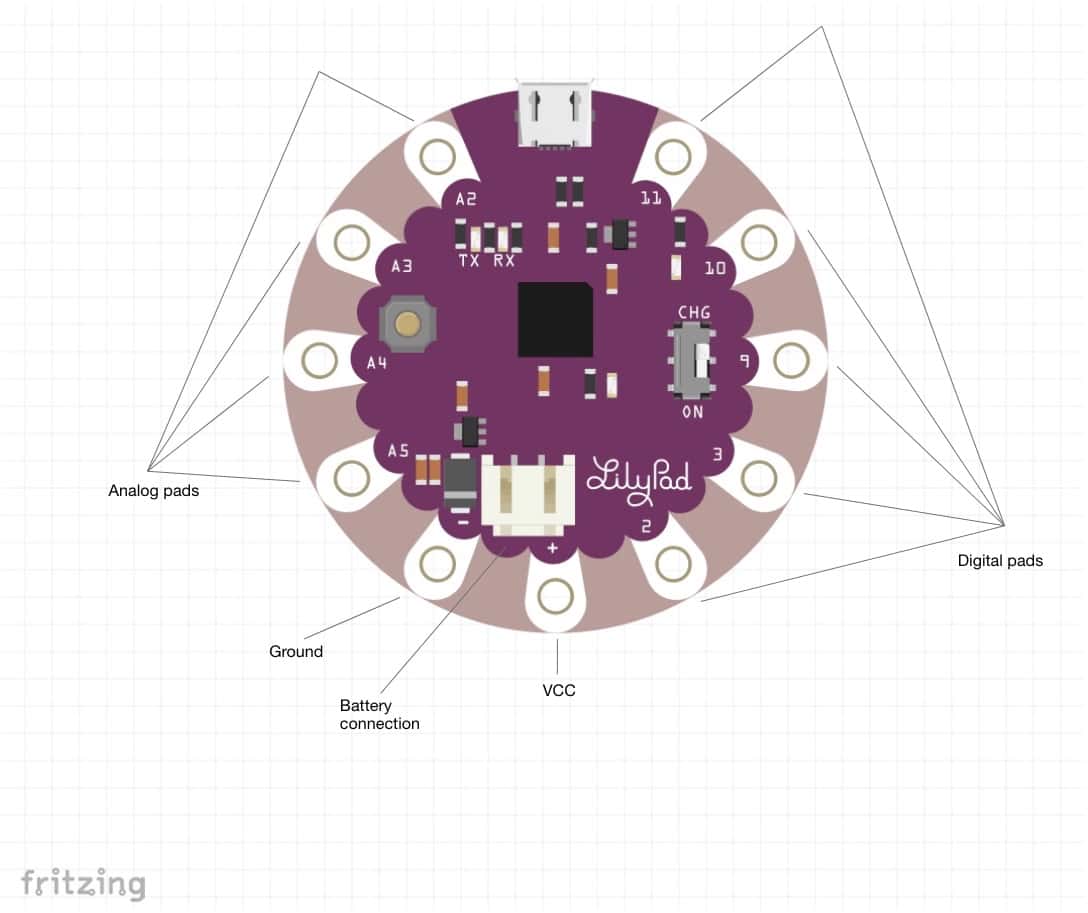 There are a few ways to connect the LEDs to the LilyPad.

The most straightforward approach is to connect a single LED to the LilyPad by connecting:

This approach will allow you to program each LED separately for maximum control. It also adds complexity when designing your circuit so that none of the positive and negative conductive threads cross. 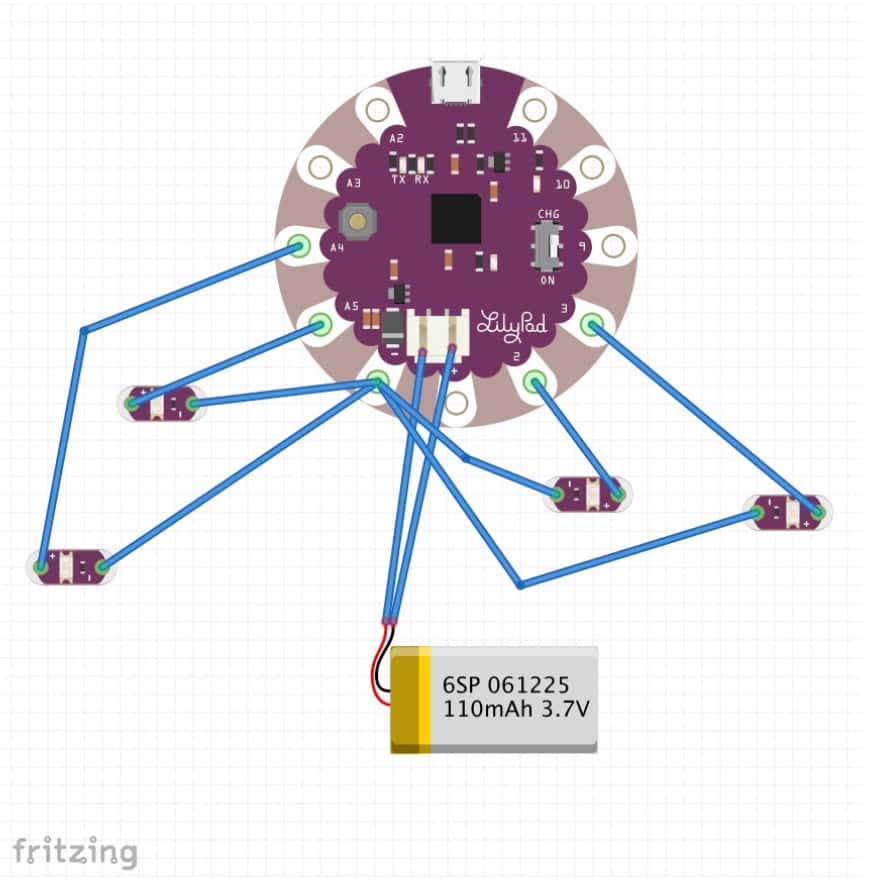 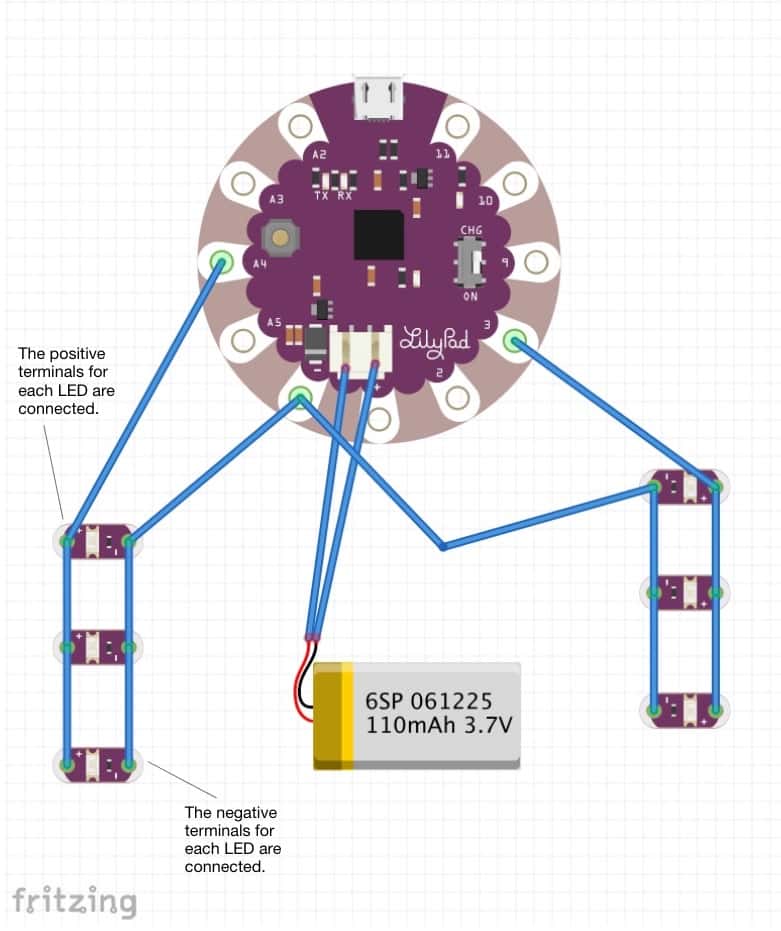 Based on the setup above, I programmed the LEDs to light up one strand and then the other in a loop. This is what the stitching looks like for the finished circuit. 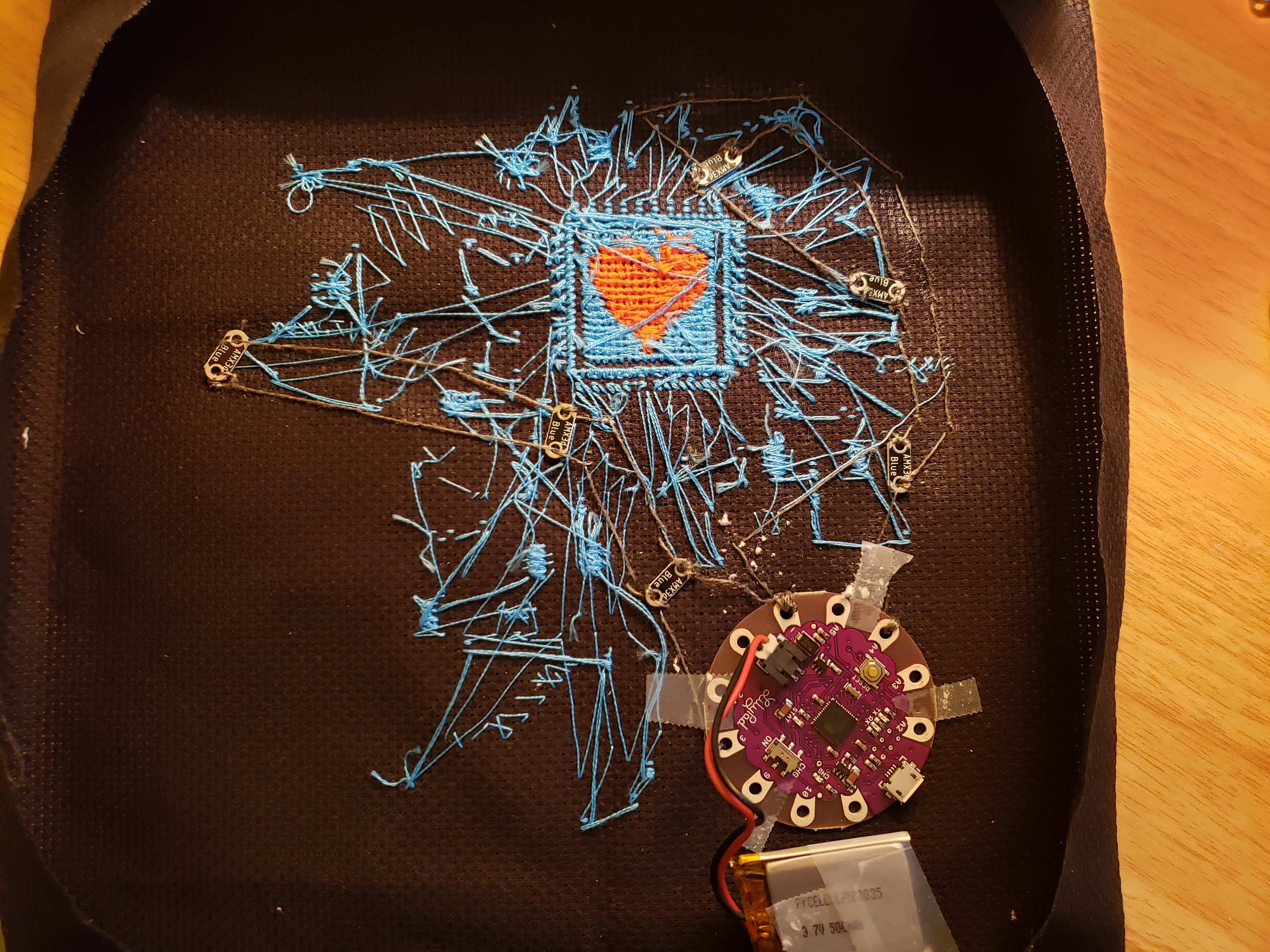 During this step, cross stitch the picture just like you usually would, but honor any pattern changes you'd like to make to accommodate the LEDs added in a future step.

The program for turning the two strands of LEDs on and off is pretty straightforward. You can copy the sketch for the program from Github. Here's a breakdown of how it works.

The lines below are variables that set which pads the two LED strands will use.

The setup function is run once the LilyPad starts the program and sets the pin mode for the two LED strands as outputs. This means that pads A4 and 3 will behave as outputs (instead of inputs) so that we can update them in the loop function. (Note: For most microcontrollers, the pads are referred to as pins because they're actually pins connected to the board. The "pads" on the LilyPad are the same as "pins" on other microcontrollers hence the use of pin in the function name.)

The Serial.begin(9600) sets the rate at which serial data is transferred in bits per second (aka, baud). It helps keep the the flow of data in sync between two devices. The value generally used is 9600 as specified here.

The loop function repeatedly runs after the setup function while the LilyPad has power. It pauses the loop for 1.5 seconds, turns on one LED strand while turning off the other, pauses for another 1.5 seconds, and reverses the LED strand that's turned on/off to give the alternating effect.

Setting the LED strand to HIGH turns on the LEDs, and setting it to LOW turns them off. Since we're using the pads as outputs, we can write the change to them using the digitalWrite function. Even though it's called digitalWrite, it will still work with the analog pads on the LilyPad, which is why we can use it with lightStrand1 on the A4 pad.

You can adjust the program to use more LED strands, use individual LEDs, alternate the light strands more or less quickly, etc. The basic program above is just a starting point based on my circuit design.

Getting the Program on Your LilyPad

You can use the Arduino IDE to put the program on your LilyPad following the steps below:

Follow the guidance in the "Planning the Circuit" section above to stitch the LEDs into your picture in the desired configuration. It's helpful during this step to test the LEDs as you go so that you don't get to the end, find out that your circuit doesn't work, and have to redo it.

When testing your circuit, make sure that you don't connect the LilyPad to a power source until you've correctly connected the positive and negative threads from the LED(s) to the LilyPad. Otherwise, you could create a short circuit.

If you run into issues where your LEDs aren't lighting up as expected, make sure that:

Lightly Brush the Fabric Glue Over the Conductive Thread

Once you're happy with the picture, lightly brush a thin layer of fabric glue over the conductive thread. This will help protect the thread and keep it in place.

That's it! At this point, you should have a cross-stitch picture that incorporates LEDs.